Calcific Tendinopathy of the Shoulder

In this condition deposits of calcium form in the tendons of the rotator cuff. The cause is not known, but up to 15% of the population will have calcification in their rotator cuff. We are unsure why some individuals develop symptoms in the shoulder and others do not. The condition is more common between the ages of 30 and 60 years of age and is usually painless. Most calcium deposits are small and only picked up incidentally on an Xray or ultrasound scan of the shoulder. Eventually all deposits disappear.

Many patients present with rotator cuff “impingement”. This typically causes pain over the lateral aspect of the shoulder and upper arm, especially with use of the arm away from the body or under load. It can also cause pain at night that may disturb sleep. This is most commonly caused by bursitis or tendonitis, and not calcification. Just because there is a deposit of calcium on an X-ray or ultrasound does not mean that this is the cause of the person’s symptoms.

Treatment for rotator cuff calcification depends upon the severity of the condition and the size of the deposits and involves both conservative treatment measures as well as surgical options. In general, there are 2 situations where the calcification itself is responsible for the person’s symptoms:

The first is called acute calcific tendonitis. This occurs when the body is actually trying to actively resorb the calcification. An intense chemical inflammatory response is generated, resulting in extremely severe pain and very limited use of the arm. However, this phase is self-limiting and after a week or so the pain will slowly subside, with eventual complete resolution of symptoms. Often a cortisone injection into the bursa will help people through the initial painful phase, after which they are effectively treating themselves.

The second situation occurs when the deposit is very large. In this situation the deposit can itself cause impingement, as the relatively firm inelastic deposit tries to squeeze under the acromion with arm elevation. This again causes inflammation in the bursa but can be more resistant to non-operative treatment. One option in this situation is to try and break the deposit down by using a technique called “barbotage”. This is done by a radiologist under ultrasound guidance where an attempt is made to irrigate and aspirate the calcium deposit. This technique directly addresses the deposit and the results in general can be quite good. Another option is to use extracorporeal shock-wave therapy (ESWT)/radial shock-wave therapy (RSWT) where a physician employs a small hand-held device to deliver mechanical shock waves on the affected area to break down the calcium deposits so that they are more easily absorbed by the body. 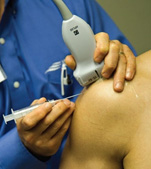 If symptoms are severe and not improving with the above treatment measures, then some people may need an operation to debulk/remove the calcium deposit from the tendon.

Recovery post surgery depends upon the location, size, and quantity of the calcium deposits. However, in general surgery does require a prolonged recovery period , as usually the defect in the tendon left after removal of the calcification needs to be repaired. Full recovery following this type of surgery can take 4 to 6 months.